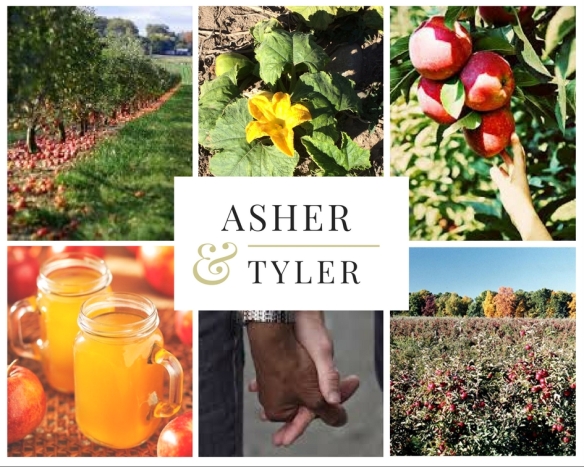 “Asher, tell me what you used to do,” Tyler says one night.Work is done; they’re sitting in the breakroom and eating, finally. Tyler is starving. While it’s encouraging, from a business standpoint, that he had no chance to take a break and eat because they were busy, he does need food. Asher took one look at his face and made him dinner. Claudia wandered out as soon as she’d finished her work, which is not unusual. Tyler usually thinks he’ll go too as soon as work is done, but often he finds himself lingering. Lately, even with his friends, Tyler feels lonely. He’s not able to put his finger on a reason, other than that he feels changed. He’s still the driven boy who worked his way through college, but he’s now driven in a different direction. He gets the impression that his work in a restaurant seems transient and directionless to those who’ve known him all along.

“Um…” Asher puts his fork down and thinks. “We used to go to the cider mill.”

“Seriously?” Tyler struggles not to laugh. Sometimes it’s crazy, the reminders of how different their worlds are. They’ve lived in the same area for their whole lives, and yet Tyler is amazed at how different their experiences are. The culture gap between the city and the suburbs is absurd sometimes.

Asher shakes his head. “I don’t know. I haven’t eaten those muffins in years. They were my favorite. He’d…” Tyler stays still. “He used to wake me up with them. He’d bring a plate into the room to me.”

Tyler bites his lip. He’s never experienced the loss Asher has. By the time Tyler’s father left them it was a relief. He’d felt heartbroken over the pain he’d put Tyler’s family through, yes, but not the loss. Tyler is by no means unfeeling, but he’d never realized how long the sharp ache of grief might last.

“You don’t have to talk to me about this if you aren’t comfortable,” Tyler says when the silence carries, “but I hope you know I want to be here to hear you.”

“Thank you.” Asher’s eyes are everywhere but on Tyler. He takes a deep breath. “It’s not… I don’t know. Missing John isn’t like it used to be. I don’t want to say I’m used to it, but I do feel as though I’ve moved past it. Or I did think so.”

“I’ve been remembering him more lately.” Asher picks up his fork and pushes his food around, then puts it down. “I guess I was so busy or lost in work I didn’t let myself think about things.”

“No.” Asher looks at him. “I should… I should want to let myself remember the good things, right?”

“Yeah. I think so,” Tyler says. In Asher’s eyes is an honest sadness; so much was laid open. “Thank you.”

Asher is one of the most closed off people Tyler’s ever known; the way he’s slowly unfolding is revelatory. “For trusting me enough to talk to me about this.”

“I wonder if I have that recipe.”

“Why? You gonna make them?” Tyler asks.

“I don’t know. Maybe.” This time Asher does take a bite of his food.

“Maybe I’ll go pick some apples. Get some real cider and bring it back. We can all have some spiced cider.”

“You know, the unpasteurized kind that doesn’t taste like cloudy apple juice.”

“I’ve never had cider,” Tyler admits. Asher looks at him. “Never done any of that shit.”

“Want to?” Asher asks, then looks as if he wishes he hadn’t. Tyler wants to touch his hand but doesn’t.

“Yeah.” Tyler wants to get Asher out of Idlewild. Wants to coax those smiles and enjoy the sense of waking he sees come over Asher from time to time. “I’m down.”

Yesterday, my family got the news that the apple orchard my family has been getting our fall apples and Halloween pumpkins at for years has been sold to a home developer. This orchard holds countless memories for my family — my boys cried when they found out. I love this place: the pictures in this aesthetic are ones I and others have taken while there. It’s not fancy, but it’s fun.

It was also the inspiration for Asher and Tyler’s first trip to pick apples together. Which, of course, led to the apple muffin scene (blog post titled, ahem, Idlewild Food Porn Sneak Peek).  In my mind, I’d envisioned this being a place they would go to every year much as we do. They would take their kids and build memories and this, like so many beautiful staples of Michigan life, would be one of their roots. Luckily, I suppose, these men live in a make believe world where they can exist in perpetuity. Maybe I’ll write them, one day, taking one of their children there for the first time, and I’ll get to hold on to that little bit.

Although, yes, above isn’t the actual scene in the book where they go to the orchard, the importance of those moments and that story building is here. Tyler learning how to understand Asher’s grief. Asher beginning to let himself reconnect to his former life and self — beginning his journey to healing. Tyler and Asher beginning to build something they don’t have a name for just yet.

My novels, Hush, What it Takes and Idlewild are all available for purchase through multiple retailers (links on my book page).